THE FOLLOWING is submitted to the attention of the United Nations, et al, for the purposes of establishing a just and good cause for the UN to instruct the Provost Marshal to communicate with this writer, forthwith; wherein, substantive preliminary information shall be collected and distributed to the United Nations, et al; warranting the UN Security Council to initiate an investigation into allegations that warrant the intervention of the Prosecutor's Office of the International Criminal Court.

WHEREAS
The Consecutively Settled Sovereign Peoples (CSSP) continue to govern in paramount right the jurisdiction of the territories and resources in the lands of Turtle Island North (TIN)- a.k.a. North America - and, that the claim of governance; and, therefore, for the purposes of this communication these territories shall be named as being CSSP-TIN; including, those lands north of the 49th parallel as registered at the United Nations as being the Elizabeth II constitutional monarchy of Canada (hereafter, EIIR Canada). The paramount claim of governance by CSSP-TIN is the customary territories since the beginning of time.

Within these CSSP-TIN territories is the absolute monarchy HRH Stitumaatulwut Hwuneem of Kwa'mutsun Nation State; non-diminished, not abandoned; non-ceded, not lost through war; not treatied with EIIR; nor, with EIIR Canada.

For the purposes of these statements, herein, Elizabeth II shall also include : (A) Elizabeth II of the United Kingdom; Elizabeth II Mary Windsor Mountbatten Battenberg Sax Coburg und Gotha. And, therefore, EIIR designates the foregoing in Joint and Several. EIIR Canada designates the pro tem claim of paramountcy of governing jurisdiction and authority upon the CSSP-TIN. CSSP-TIN rejects this EIIR Canada claim; and, further, notes the established EIIR Canada 1996 and 2015 federal reports on the historical mission and executions of agenda upon the CSSP-TIN; wherein, genocide practises through EIIR Canada are tabulated and recorded in the public domain as originating and continuing against international convention, treaties and doctrines and the customary CSSP-TIN laws entrenched for purposes of the public interest in matters of civil, human and political rights; in particular, including the United Nations Charter and, the Chapter VII provisions regarding the actions by a foreign, hostile military occupancy ultra vires to the UN Security Council rights and duties.

The historical Charles II of England Hudson's Bay Company Charter (HBCC); and, its original restrictions regarding the prohibition of acquiring foreign lands; and, further, the evident demise of this HBCC in 1697, due to the absence of assent by either the Long or Short Parliament.

It is noted that the claim of EIIR Canada is rooted within the purchase of lands from the Hudson's Bay Company. It is the submission of this brief, herein, that CSSP-TIN remain as being the rightful in law governing authorities of lands named EIIR Canada.

FURTHER
The 1996 Canada Royal Commission on Aboriginal Peoples; the December 2015 Final Report of the Canada Truth and Reconciliation; as chaired by Justice Sinclair; and, the final report by UN Rapporteur Anaya regarding the assessment of the failures of EIIR Canada in its nation-to-nation relationships with CSSP-TIN establishes the tapestry of crimes against humanity and war crimes allegations against EIIR Canada and EIIR United Kingdom, Joint and Several.

SO SAY WE IN TRUTH
INTERNET COMMUNICATIONS 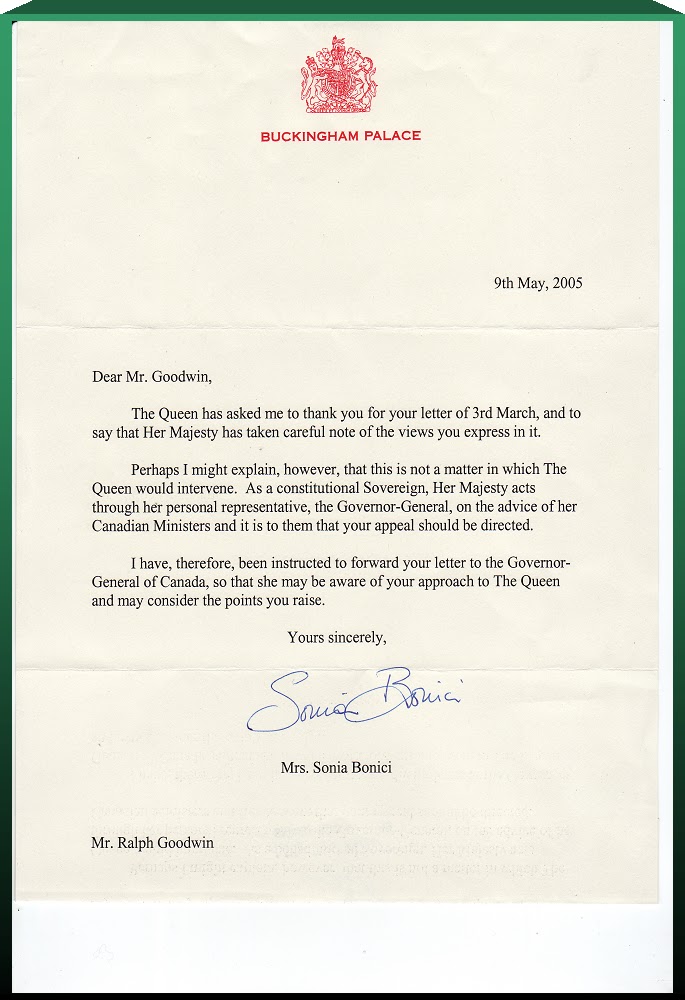 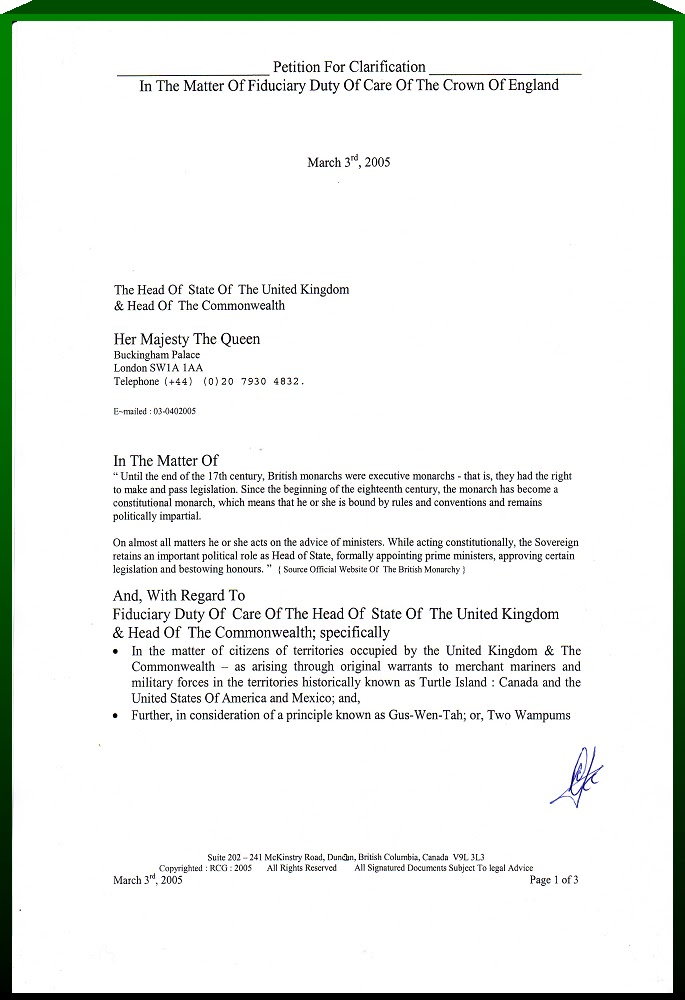 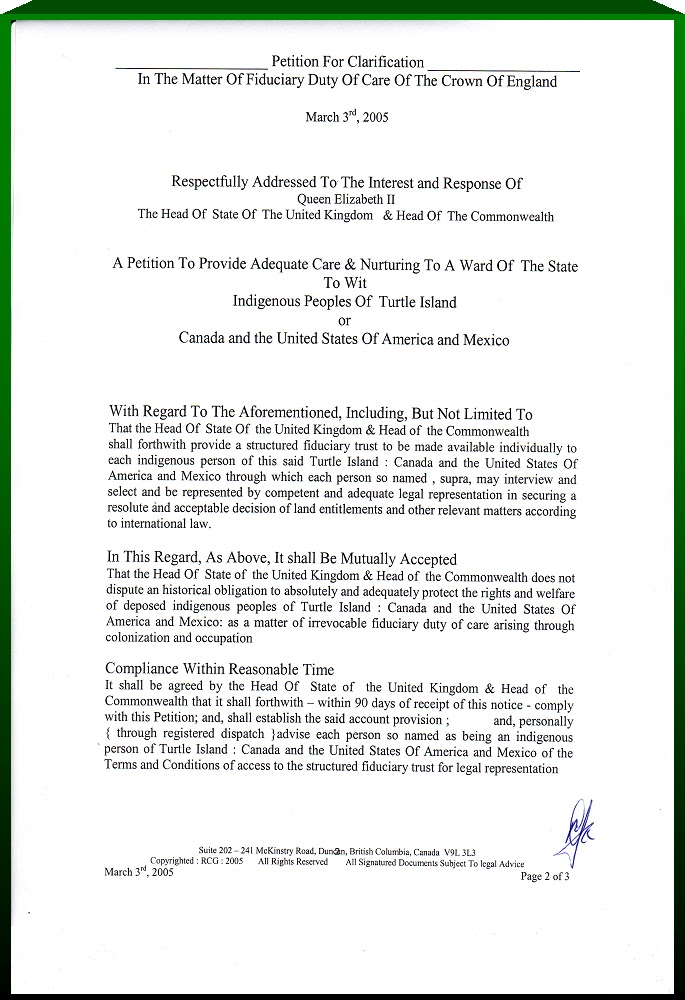 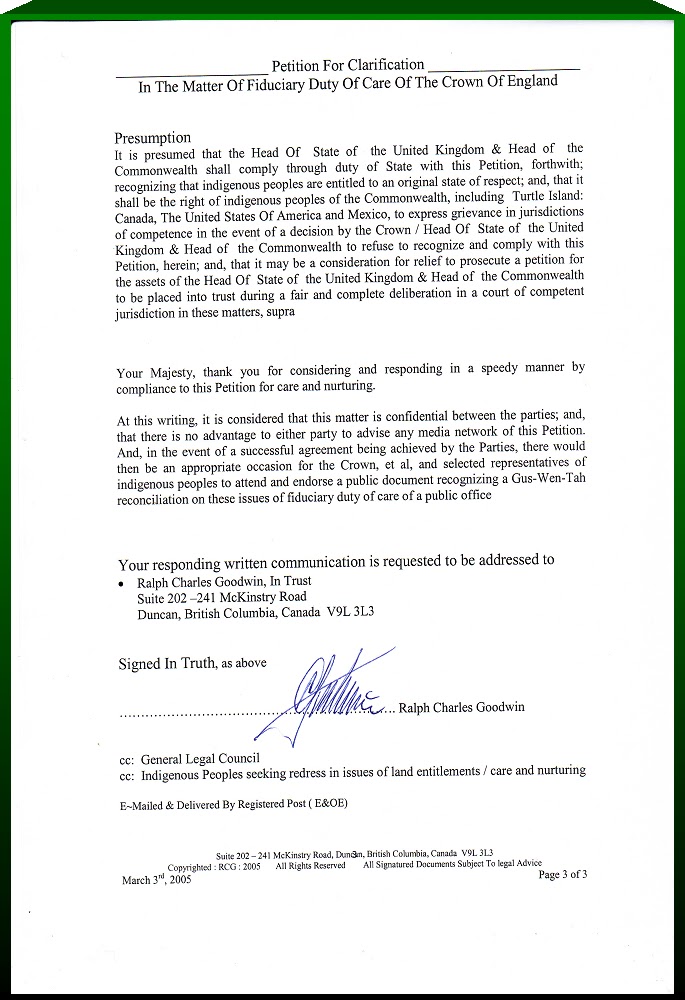